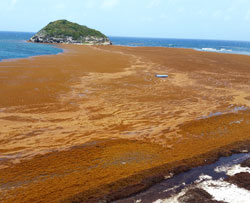 Aquatic plants serve a number of useful purposes in our waterways. They provide the surrounding fauna with oxygen, food and shelter while promoting water clarity. But invasive species can become "too much of a good thing" – so abundant that they create overpopulation and sunlight blockage problems. Such difficult-to-control nuisance plants appear in both salt water and fresh.

Sargassum is one of the greatest problem weeds in the Western Hemisphere. It rides in on ocean waves and piles up on shores in giant, brown mats of rotting vegetation. The bane of resort owners in the Caribbean and Florida Keys, invasive sargassum can blanket beaches and wreak incalculable havoc on the tourism industry.

A form of algae, sargassum is a genus of brown seaweed that floats in tropical oceans around the globe, sometimes in clumps stretching many miles. It hosts an array of sea life that takes refuge within its leafy structures. An entire 2 million square miles of the Atlantic Ocean is filled with this vegetation and, accordingly, is known as the Sargasso Sea.

Sargassum sometimes finds its way into seaside communities in Mexico, the Caribbean, and even Galveston, TX, making a colossal mess. Scientists don't know why for certain. But the ensuing beach cleanup can be arduous, much of it done with pitchforks, rakes and manual labor. Sometimes backhoes and other large equipment are called in to remove giant mounds of the decaying plant material.

Freshwater plants also create enormous trouble. One of the smallest flowering plants in existence, duckweed is a persistent problem in still, freshwater bodies. It invades ponds aggressively, blanketing the entire surface with dense colonies if given enough time. Duckweed colonies block out the sunlight necessary for sustaining diverse plant life and put fish and microorganisms at risk by depleting oxygen levels.

The plants reproduce rapidly and spread from pond to pond on the feathers of waterfowl. A pond or lake covered with these living mats can be a challenge to clean up, because any of the remaining plants can begin the population explosion all over again.

Native to the Amazon basin, the invasive water hyacinth entered the United States during the 1884 World's Fair in New Orleans. Its numbers took off at an exponential rate in the nutrient-enriched waters. This flowering plant choked water flow in rivers, lakes, ponds and other freshwater bodies. When they dominate an area, water hyacinths furnish mosquitos with ideal breeding grounds, diminish fish populations by using up all the oxygen, and disrupt the balance of sensitive freshwater ecosystems.

Water hyacinths are a nuisance on several continents. The problem became so severe that the U.S. Congress voted on a bill in 1910 to release hippos into Louisiana waterways to eat the plants. The bill lost by a single vote, but such desperate measures indicate the scope of the problem.

Some aquatic plant experts consider hydrilla, with its copious, rapidly spreading stems, to be one of the most serious nuisance plants in U.S. waters – particularly in Florida and other southern states. Aquarium hobbyists introduced hydrilla into freshwater environments around 1960. The plants now fill waterways where they've taken hold.

Their pernicious effects are manifold: They change the water pH, crowd out the native plants and hamper boating. Huge masses of hydrilla also encumber irrigation efforts. All of the various activities to remove and curtail the plant cost millions of dollars every year.

One simple method of controlling these and other invasive floating plants is to deploy the Orion Aquatic Plant and Debris Boom. The boom acts as a perimeter around the invasive plants, effectively containing them so they stay out of sensitive areas where they do the most damage.

You can also use the Aquatic Plant and Debris Boom to form a blockade and treatment area for the appropriate herbicide application, or to direct floating plants into shore for harvesting.

Extremely heavy-duty booms designed for ocean use can deal with incoming sargassum invasions in one of three ways: containing the plant for cleanup, deflecting it along the edge of the boom, or excluding it from designated areas by creating a barrier.

Booms of all applications are available in a variety of materials suitable for site-specific conditions. They also come in several colors – suitable for high or low visibility. Customers prefer low-visibility colors such as blue, green or black when they wish the boom to blend into the environment and not stand out in scenic locations. Brighter colors such as orange or yellow are preferred when marine locations require high-visibility for boat traffic in harbors or intercoastal waterways.

Whether you're dealing with problem plants in salt water or fresh, let our experts help you determine the best solution for the particular challenge you're facing. Call 1-772-646-0597 for any additional questions. 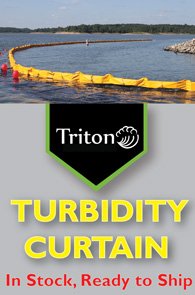 GEI is a global solutions provider offering our expertise and products in the following states, countries, territories and provinces:

GEI is a global solutions provider offering our expertise and products in the following states, countries, territories and provinces: